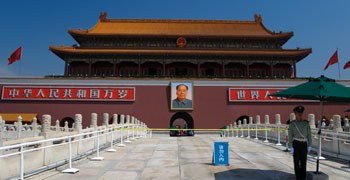 As mentioned in the previous post, after Beijing we flew to the “small” city of Xi’an (population of just 8 million).
After a good night of rest we visited the ancient city wall. Before we went up the wall, we went to see the daily official opening of the city gate, complete with re-enactment of historic times.

Nicest thing about the wall is that you can explore the wall by bike. As we were here very early it was still quiet. Definitely one of the most fun parts of our vacation.

In the afternoon we went to the Terracotta Army museum. This is really an impressive site to explore. Unbelievable how every terracotta soldier has a unique face.

The second day in Xi’an we had to get up very early as we wanted to see the morning excercises in the parks. We arrived at the park surrounding the Small Pagoda of the Wild Goose and watched several groups performing Tai Chi and other excersises.

In the afternoon we visited the Shaanxi museum in Xi’an and the local mosque with an architecture that combines moslim and Chinese influences. We ended our visit to Xi’an with the Tang Dynasty Show.

The next day we got up early again, to catch the first flight to Lhasa, Tibet. More to come…

No comments yet
China travel Xi'an

This site uses Akismet to reduce spam. Learn how your comment data is processed.